GOVERNMENT has commended the Zambia Law Development Commission (ZLDC) for the step taken in launching the 2021-2026 Strategic Plan, Newsletter, and the Re-designed Website. 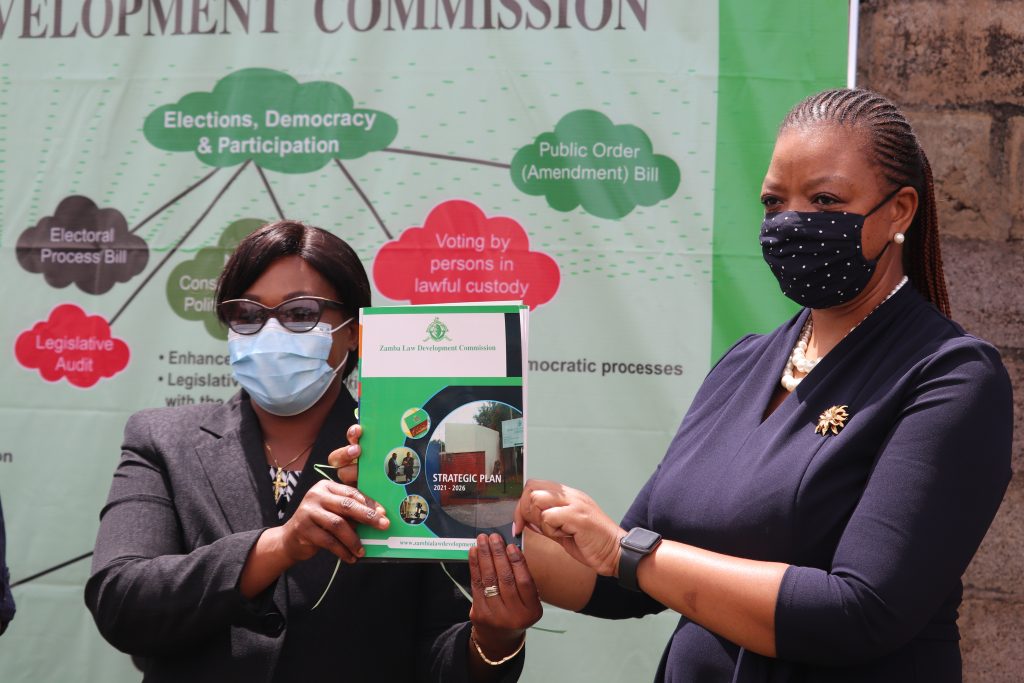 The launch took place on 30th March, 2021 at the ZLDC’s offices while other cooperating partners followed the proceedings on Zoom.

In a speech read on his behalf by the Permanent Secretary, Ms. Thandiwe Daka Oteng,  Justice Minister Given Lubinda called on ZLDC to ensure that the Strategic Plan  was  followed and implemented accordingly adding that Government recognises and is dependent on the Commission’s role in law reform processes through research and stakeholder engagement processes.

‘The launch of the Commission’s Strategic Plan clearly outlining, inter alia, the mission statement; strategic themes; strategic objectives, targets, and intended results gives Government the confidence that the Commission has defined the strategic policy direction to pursue its primary statutory mandate of conducting law reforms that reflect the social and political values of the Zambian people’, he said.

He further stated that the information to be accessed on the website and through Newsletters will stimulate stakeholder interest, support, and participation in law reform processes stating that such efforts, operations and processes will be supported by Government. 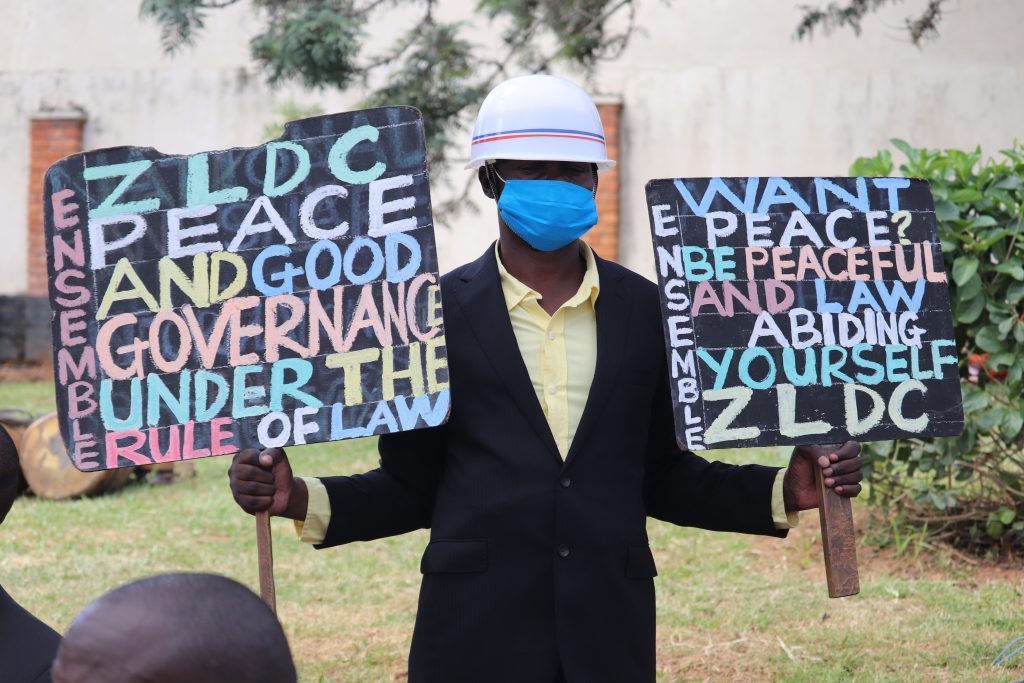 A member of Ensemble Arts Acres shows placards depicting what ZLDC does in the law reform process.

Speaking at the same event, ZLDC Chairperson Madam Justice Roydah M.C Kaoma reassured Government and the public that it remained committed to conducting law review in Zambia and that the execution of the Commission’s mandate shall be done with integrity, teamwork, accountability, objectivity, and proficiency as dictated by the Commission’s shared values.

She added that in order to engage every stakeholder in the law reform processes as far as information dissemination is concerned, the Commission has published a Newsletter with a special focus on Zambia Law Development Commission Public Engagement in the Law Reform Process, and by redesigning the Website.

‘’Regarding the rebuilt Website, the Commission has recognised and appreciated the rapid advancement in technology in the recent past which has led to increased demand for e-services. Therefore, we have strengthened our Information Communication Technology (ICT) to make it possible to share and receive information on law review from the public without digital barriers’, she said.

And German Development Cooperation (GIZ) representative Johanna Strohecker noted with gladness that the Commission remained a key organisation in promoting good governance and national development through the promotion and development and dissemination of law reforms adding that the Cooperation will continue to render support to processes that are aimed at development. 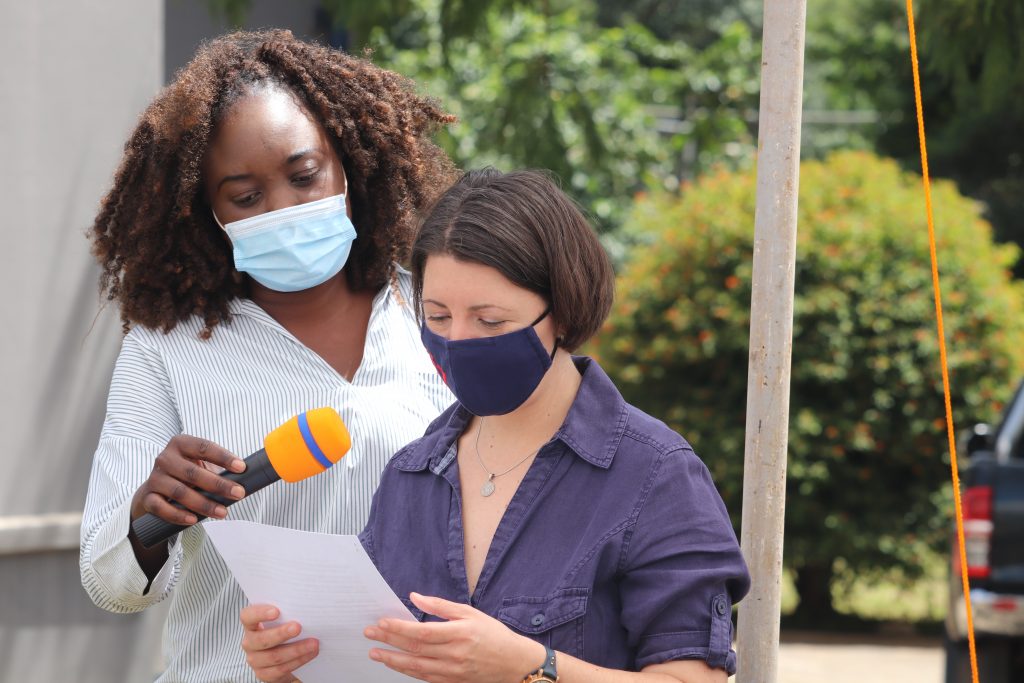 ‘We remain committed to supporting processes which promote sustainable development and engagement of citizens in attaining the desired development in Zambia’, she said.

Speaking earlier, ZLDC Director Hope Ndhlovu Chanda said the Commission believed that it cannot carry out its mandate without the support and collaboration with stakeholders both locally and internationally, therefore, ‘the Commission needs the support in implementing various projects and activities relating to law review processes’.

In a vote of thanks by Commissioner Patrick Samwimbila, the Commission thanked the Government, cooperating partners and stakeholders who have been instrumental in the law reform processes in the country.

THE SUMMARY OF STRATEGIC PLAN, PUBLIC ENGAGEMENT AND PLANS FOR THE FUTURE

In 1996, the Zambia Law Development Commission (ZLDC) was converted from a department in the Ministry of Justice to a semi-autonomous statutory body established under the Zambia Law Development Commission Act, Chapter 32 of the Laws of Zambia. The decision to convert it from a department to a statutory body was necessitated by the need to have an independent body with a full mandate to carry out comprehensive law reform in the country. 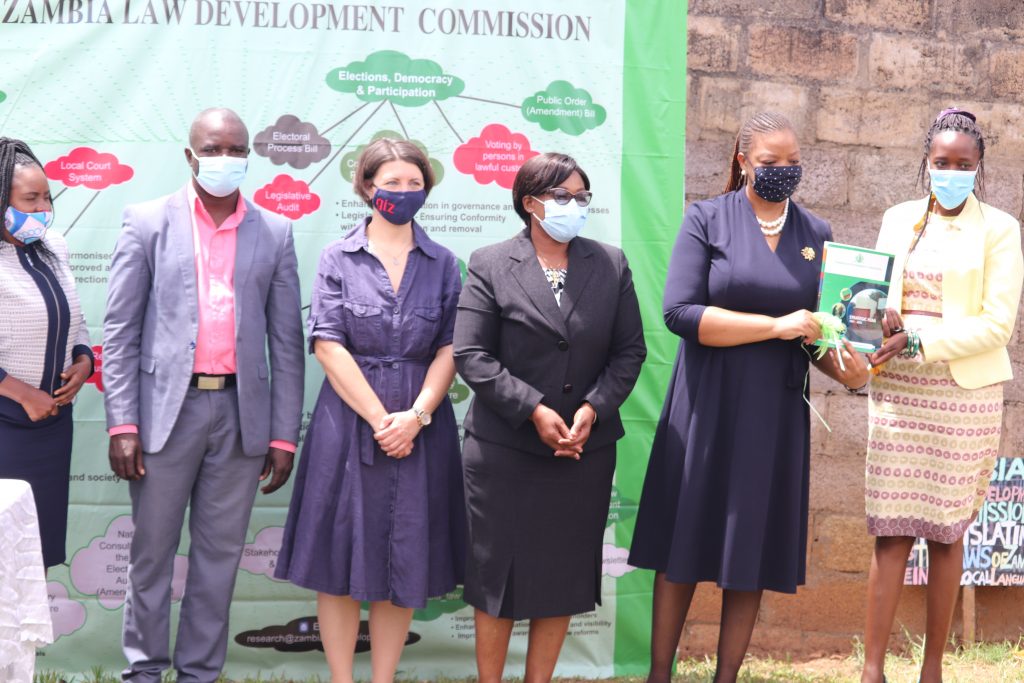 The primate mandate of ZLDC therefore is to carry out law review and reform through systematic research.

The law reforms that ZLDC undertakes are aimed at;

The ZLDC is duty bound to undertake law reviews on recommendations from the Minister of Justice, from line ministries, statutory bodies and indeed from any member of the public.

The Commission comprises 13 members appointed by the Minister of Justice in accordance with the ZLDC Act for a renewable term of 3 years. The day-to-day operations of the Commission are undertaken by a Secretariat with an establishment of 35  members of staff.

The Commission has undertaken law review projects in a number of key national development areas such as Elections, Democracy and Participation; Justice Reforms; Social Inclusion; Gender Balance; Economic Empowerment; and Public Engagement and Information Dissemination: The key interventions in these thematic areas have been as follows:

The long-term impact of projects and activities conducted by the Commission has been the enhanced participation of the public on matters of governance, and the creation of a conducive environment within which constitutionalism thrives. Among other outcomes, laws have been harmonized while archaic provisions have been removed from statute books. In addition, there is improved access to and dispensation of justice, This has also resulted in the creation of an inclusive environment in which disadvantaged groups of society, such as women and the rural poor, have equitable access to justice and national resources.   Eventually, the thematic areas have contributed positively towards the attainment of goals set under national developmental plans such as the Sixth National Development Plan, Seventh National Development Plan and the Vision 2030.

The successes the Commission has scored so far cannot be attributed to the Commission’s efforts and ingenuity only but were achieved through partnerships cultivated over the years with government ministries and statutory bodies, civil society organisations (CSOs)  and cooperating partners such as the German Technical Corporation (GIZ), United Nations Development Programme (UNDP), United Nations Office on Drugs and Crime (UNODCC), the European Union (EU), the International Organisation of Migration (IOM), United Nations Children’s Fund (UNICEF) and Save the Children.

The partnerships have increased collaboration, knowledge, expertise, and resources available to make better pieces of legislation and to reach and engage a larger number of stakeholders.

In an effort to enhance these collaborative efforts, their the impact and the visibility of the Commission, the German Technical Corporation (GIZ), in 2019 funded a project titled “ZLDC Public and Civil Society Engagement in the law reform process”.  The project was aimed at promoting increased participation, understanding and engagement in the law reform process by government ministries, statutory bodies, civil society organisations, the media and the general public .

Under the Public engagement project, the Commission undertook stakeholders consultative and information dissemination meetings with office of the Vice President, Cabinet Liaison Officers, CSOs and the media. The objectives of the meetings were to discuss proposed areas of law reform and on-going law reform processes in Zambia; Provide a platform for civil society and the media to recommend and advocate for proposed areas for law reform, and to develop and create synergies for future collaborations; and to recommend interventions and avenues on how government ministries and departments, the civil society and media can collaborate with the ZLDC in disseminating information on law reform processes in the country.

Under this project, the Commission also successfully

In order to build on these successes the Commission resolved to develop a strategic plan to better guide and give direction and focus to its work. With technical support from Management Development Division of Cabinet Office the Commission developed its 2021–2026 Strategic Plan.

The plan is aimed at ensuring that the Commission puts in place an effective framework for stimulating stakeholder interest, support and participation in the execution of programmes. The plan will be guided by its new vision which is to be “a dynamic institution for responsive laws to the needs of the nation” and mission statement which is “To recommend revision and reform of the law for enhanced laws”.

Since its establishment, the Commission has grappled with a number of challenges which have included:

Therefore, building from its past successes and learning from the challenges that were faced, the key focus areas of the Commission’s 2021-2026 strategic plan will be:

With the 2021-2026 strategic plan, the Commission shall continue to provide principled, progressive new laws and be a catalyst of change while responding to the ever-changing needs of the public we serve. The ZLDC is committed to ensuring that the public, government ministries and departments, media and civil society organisations are engaged in the law reform processes.