The Minister commended the work the Commission had undertaken so far, further urging ZLDC to be aggressive in sourcing funding and support to help undertake law review activities. The Minister told the Commission that there is need to undertake among others, the judicial reforms as alluded to by His Excellency, President Hakainde Hichilema and that the Ministry would engage the Commission in this regard.

The Minister informed the Commission that there is need to resolve the conflicts in the court structure. He also added that he will task ZLDC to develop legislation to facilitate the establishment of the fast-track courts and he further stated that he hopes to see progress and tangible results in law review processes by the end of the year.

The Minister said this today (14th September, 2021) when the ZLDC staff led by the Commission Director, Mrs. Hope N. Chanda paid a courtesy call on him at the Ministry of Justice Headquarters, in Lusaka.

During the meeting which was also attended by the Permanent Secretary, Mrs. Thandiwe Daka Oteng and other senior officers of the Ministry, the ZLDC Director Mrs. Chanda briefed the Minister on the legal mandate the Commission has relating to law review processes in the country, explaining the phases that are taken before the final draft bills and reports are handed over to the instructing ministries, statutory bodies or institutions.

The Commission highlighted selected law review processes it has undertaken in 4 key thematic areas outlined by His Excellency, President Hakainde Hichilema in his inaugural address during the official opening of the 1st Session of the 13th National Assembly as well as in the Minister’s remarks on ZNBC TV 1 Sunday Interview that centred on law reforms and increased stakeholder participation in the law reform process.

She explained further, that the Commission had also led the process of developing legislation to repeal and replace the NGO Act. The rationale for repealing and replacement the Act was due to the concerns raised by the stakeholders that the Act was inconsistent with the freedom of association as enshrined in the Constitution, NGOs had excessive compliance obligations, and there was inadequate coordination of the sector.

Ms. Jere told the Minister that the Commission also led the national stakeholder consultative processes on the development of a Political Parties Bill and on the review of the Public Order Act in 2017 and 2019 respectively.

‘’ZLDC was appointed to conclude the stakeholder engagement process and develop the reform report and finalise the draft Political Parties Bill’’, she said.

Ms Inutu Akolwa, also a Senior Research Officer at the Commission told the Minister that the Commission was tasked to lead the stakeholder consultative process and completion of the proposed amendments on the review of the Rural Electrification Act No. 20 of 2003 in order to ensure the sector has an appropriate policy framework that will promote affordable energy. 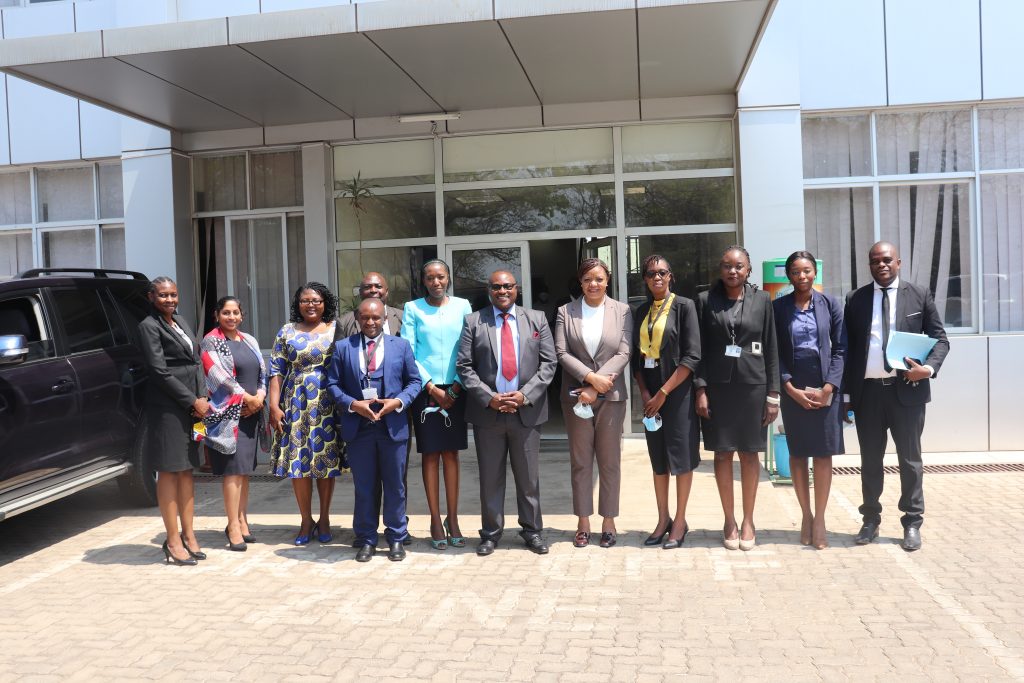 Hon. Haimbe , Permanent Secretary, Mrs. Thandiwe Daka Oteng and other senior officers of the Ministry and the ZLDC staff pose for a group photo

With regard to the engagement of stakeholders in the law review process Ms. Ngela Munalula the Commission’s Library and Information Officer informed the Minister that the Commission had embarked on a public engagement and information dissemination programme aimed to promote public and civil society participation and interest in law reform and development, promote cooperation between government ministries and departments and enhance collaboration between civil society and the Commission with regards to initiation of, and participation in on-going law reform activities.

She further explained that in order to enhance the stakeholder engagement in the law reform processes, the ZLDC has created information sharing platforms such as the website, Facebook page, twitter, YouTube, newsletter, weekly articles and information sharing meetings with the public and had utilised virtual platforms such as zoom to conduct stakeholder engagement.

Ms. Munalula added that the Commission is committed to ensuring that the public, government ministries and departments, media and civil society organisations are engaged in the law reform processes.